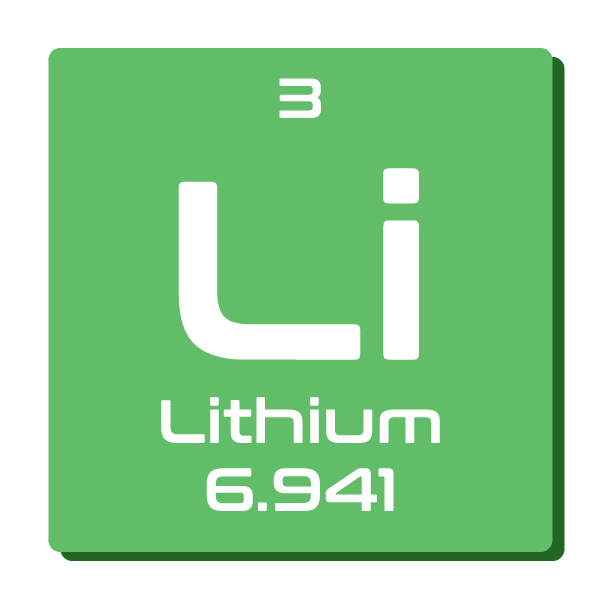 The lithium atom is the smallest of the metal atoms in the periodic table.  It is the lightest and most reactive of the alkali metals, it floats on water but strongly reacts with water yielding lithium hydroxide and hydrogen gas. Lithium is a soft silver-grey metal, yet when combined with metals such as magnesium, it forms a very strong alloy.  Lithium is also highly reactive, reacting with water, oxygen, carbon dioxide and nitrogen at room temperature. In contrast, lithium compounds, are very stable.

Lithium was first identified in 1817, one of several to be found during a golden age of element discovery. In 1800, the Brazilian scientist José Bonefácio de Andrada e Silva (1763-1838) discovered two new minerals on the Swedish island of Utö which were called petalite and spodumene. But it was only in 1817 that the Swedish scientist Johan August Arfvedson (1792-1841) who worked in the laboratories of the renowned chemist and professor of medicine and pharmacy, Baron Jöns Jacob Berzelius (1779-1848), was able to solve the problems regarding inexplicable differences in the analyses of these minerals. He isolated a sulphate which did not contain any of the known alkali or alkaline earth metals. The new element he found was finally named “lithium”, derived from the Greek word “lithos” for stone. With the discovery of this new element, another gap in the periodic table was filled.

Due to lithium’s high reactivity, metallic lithium is not found as such in nature. Traces of this element are present in nearly all minerals, brines, clays and sea water. The crust of earth contains an average of about 20 parts per million (ppm) or 0.0020% while sea water typically contains 0.18ppm Li (0.000018%). The main lithium-bearing minerals found in pegmatites are spodumene, petalite, lepidolite, amblygonite/montebrasite and eucryptite.  Typical concentrations of lithium in pegmatites range from 1% to over 4% Li2O.  Spodumene is the most important lithium-bearing mineral in terms of production because deposits are large, the lithium content is relatively high (Table 1) and the ores are comparatively easy to process.  Spodumene was the principal source of lithium for lithium carbonate production until the mid-1990s.  Petalite and lepidolite are also recovered in economic quantities.

Currently, Western Australia, China and Zimbabwe are the main processors and suppliers of these hard rock minerals.

Spodumene is a lithium aluminium silicate mineral.  It undergoes an irreversible phase transformation at about 1,080ºC to tetragonal beta phase and exhibits a very low thermal coefficient of expansion.  The change is accompanied by a 30% increase in volume and a drop in relative density from 3.2 to 2.4.

Petalite is also monoclinic and, when heated, it converts to beta spodumene quartz in the solid solution phase.  It is especially useful for direct application in the glass industry because of the low iron content.

Lepidolite is a complex lithium mica and monoclinic.  It was originally the most widely-used lithium mineral but demand has fallen because of the significant fluorine content.

The semi-precious stone kunzite is chemically pure spodumene. The pink coloration is caused by traces of manganese. Another variety is hiddenite which is greenish (chromium impurities). High concentrations of lithium are found in brines at numerous playa lakes or salars in North and South America and in China.  Lithium is also found in brines in certain areas of geothermal activity, such as such as western USA, Europe, New Zealand and Iceland, and in certain oilfield brines.  Sea water contains lithium but the concentrations are very low and only certain enclosed seas, such as the Dead Sea, which has little inflow and high evaporation rates, have higher concentrations of lithium, however these are still well below that at the salars.

Salars are large, dry lake beds where brines are located just under a layer of crusted salt deposits.  Lithium-containing salts are concentrated over time to reach levels of 200ppm to over 2,000ppm.  Lithium brines occur in salars which have formed as closed or restricted drainage basins where the evaporation rate is higher than the precipitation.  Most such basins are located at high altitude in major mountain chains, such as the Andes.  Most salars have a salt crust carrying some sand, clay and other minerals; the salt crust is porous and the interstices contain the salt brines.

The Zabuye salt lake in Tibet, China, is of interest because it is the only known location where Zabuyelite, a natural lithium carbonate, is precipitated naturally.

Production of lithium from seawater, geothermal brines and oilfield brines has been, and continues to be, investigated.

The lithium content of underground brines is low, but is very large, and substantial reserves of lithium occur in seas around the world, although again concentrations are very low.  In addition, pegmatites containing lithium minerals have been identified and worked in France, India, Mozambique, Sweden and Ukraine, but reserve data for these and other deposits is lacking.  Increasing consumption and prices for lithium products has prompted increasing exploration for, and assessment of, new lithium deposits, therefore reserve data for lithium has the potential to be further revised in the future. Hectorite – (Mg,Li)3Si4O10(OH)2NaO.3(H2O)4 – is a lithium-magnesium-sodium montmorillonite, usually containing 0.3-0.6% Li.  Numerous deposits occur in Nevada, California, Utah, Oregon, Wyoming, Arizona and New Mexico in the USA.  Hectorite is unique in that it is a commercial authigenic lithium montmorillonite clay mineral of telethermal origin.  It modifies liquid systems to a gel-like structure through its properties of dispersibility, suspension and thickening.

Note 1:  6 November 2011. By USGS definitions, the reserve base “may encompass those parts of the resources that have a reasonable potential for becoming economically available within planning horizons beyond those that assume proven technology and current economics. The reserve base includes those resources that are currently economic (reserves), marginally economic (marginal reserves), and some of those that are currently subeconomic (subeconomic resources).” Lithium can be processed to form a variety of chemicals, including lithium carbonate, lithium bromide, lithium chloride, butyl lithium and lithium hydroxide. The fastest growing and largest market for lithium globally is for use in batteries.

Electrification of vehicles is strongly supported by governments around the world due to the increasing political and consumer focus on climate change and energy security. The introduction of mass produced passenger electric vehicles has the potential to significantly increase the future consumption of lithium.

Lithium chemicals are also used in a variety of other applications including:

Lithium is also used in a variety of metallurgical applications including:

We use cookies on this site to enhance your user experience. By clicking any link on this page you are giving your consent for us to set cookies.